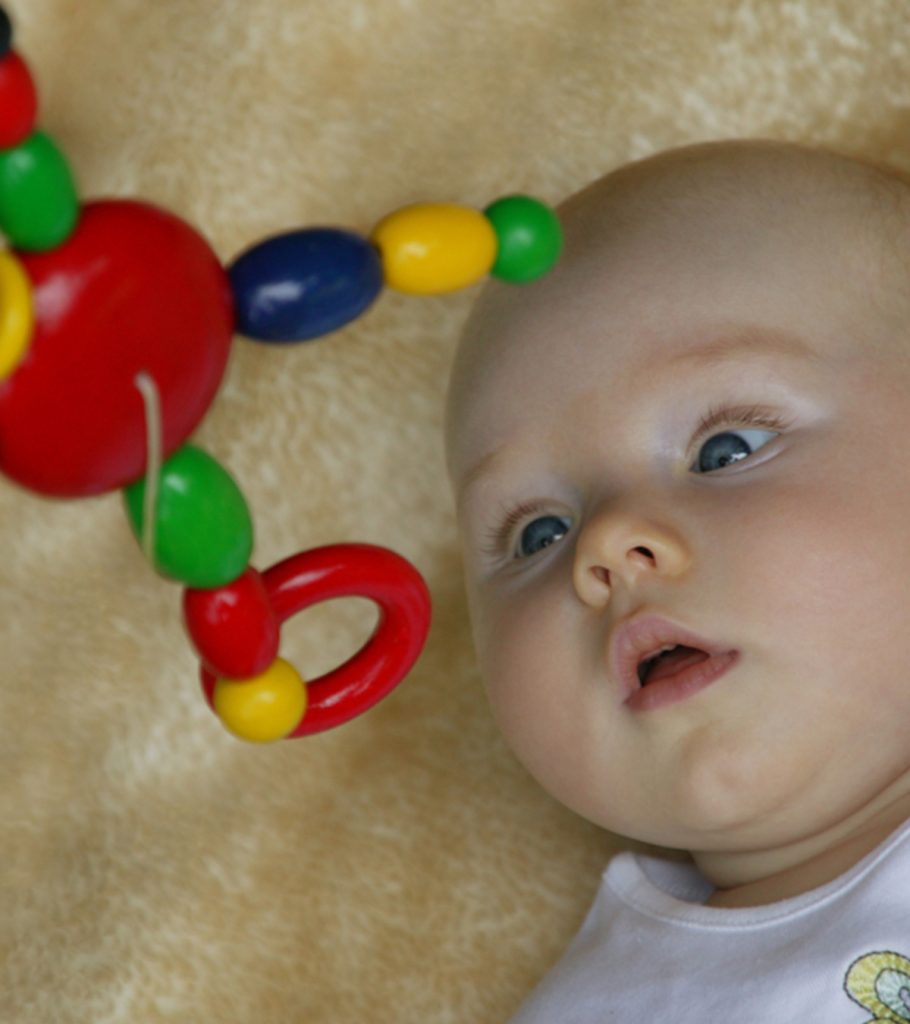 As a parent, you might be curious to know when babies see colors and start distinguishing between them. This post has all the answers regarding babies’ color vision.

As is the case with any developmental milestone, such as crawling, walking, or talking, babies learn to see and distinguish between different colors over a period of time. It generally takes about a year for their vision to reach the normal levels of adults and three to four years to develop fully (1) (2). However, this may vary among babies as every baby develops at their own rate.

Keep reading as we tell you all you need to know about babies’ color vision milestones in the first 12 months. We also acquaint you with certain vision problems that you should watch out for.

When Do Babies See Colors?

A neonate’s eyes are slightly bigger than half the size of that of a grown-up and have limited focus, approximately eight to ten inches.

A newborn can differentiate between light and dark at birth. They begin to track objects in the first week, but it could take a few weeks before they see their first primary color. And it is believed that by the time they are five months old, they see the full spectrum of colors (2) (3).

What Colors Can Babies See?

Newborns can only see black, white, and shades of grey. They start to see their first primary color — red, in the first few weeks after birth and see the full spectrum of colors by five months. By the time they are 12 months, they should be able to distinguish between even the different hues and shades of colors (2).

What Are The Vision-Related Milestones Of Babies At One Year?

The following are the common vision-related milestones of babies in their first year. Note that the rate at which each baby reaches these milestones may vary (2) (4) (5) (6).

One to three months

How Do Babies See Color In The First Year Of Life?

A newborn’s vision develops rapidly during the first year of life. Learning about how an infant grows to see the beauty of the world by perceiving the colors is fascinating. Here’s a rough timeline of how they see color in their first year of life (2) (6).

What Warning Signs Should Parents Watch Out For In The First Year?

As a baby’s vision develops quickly during the first year, it is crucial the parents remain attentive and look for signs of any eye or visual problem to avoid future complications.

Although vision problems are quite rare in infants, consult their optometrist promptly if you notice any of the following signs and symptoms of vision problem (5) (7).

Parents should take their infants for regular eye exams to determine the baby doesn’t suffer from eye problems such as strabismus and nystagmus (8) (9).

When Do You Know If The Baby Is Color Blind?

The baby’s inability to recognize colors such as red, green, brown, or orange indicates color blindness.

The symptoms of color blindness generally become apparent when your baby is in pre-school. You could suspect color blindness if your infant is extremely sensitive to light and has excellent night vision.

Consult your infant’s optometrist to rule out eye problems, such as glaucoma, macular degeneration, cataracts, or diabetic retinopathy, which could be risk factors (10) (11).

Does My Baby Need An Eye Doctor Yet?

Routine eye checkups are a must to ensure the perfect eye health of your baby.

According to the American Academy of Ophthalmology and the American Academy of Pediatrics, newborns, especially premature babies or ones with a family history of eye disorder, should be examined for general eye health by the pediatrician in the hospital nursery to rule out infections, defects, cataracts, or glaucoma. And at six months, the baby’s eyes should be checked for alignment and vision maturity as part of the well-child visits (11).

An infant’s vision develops quickly in their first year of life. Observe your baby’s vision-related milestones in the first year closely, and take them for regular checkups. If you suspect any vision problem, consult an optometrist or pediatrician promptly.