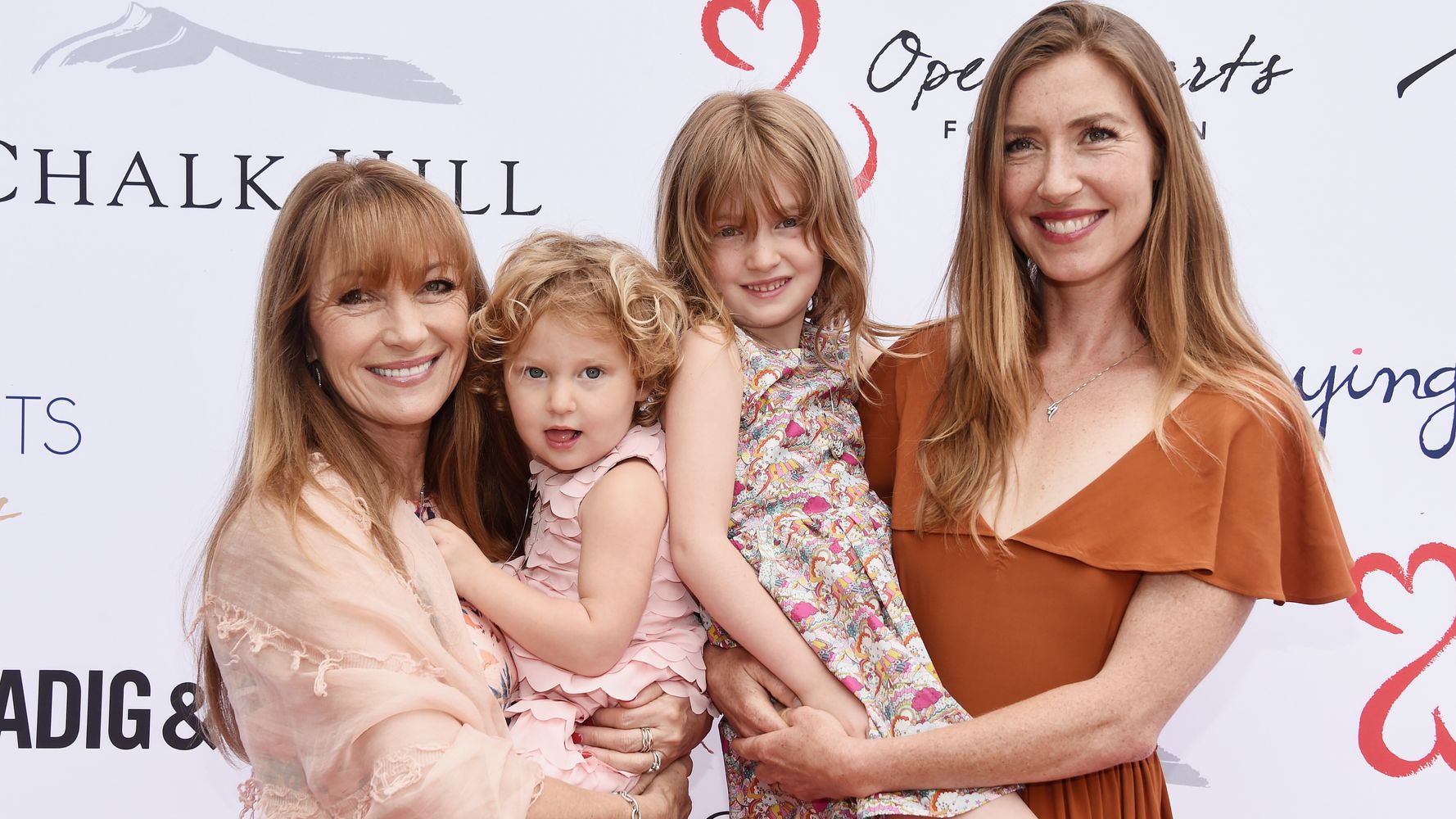 Jane Seymour knows what it’s like to parent at many stages of life.

The actor describes herself as a mother of six ― daughter Katherine, son Sean, twins John and Kristopher, and stepkids Jenni (the daughter of her husband David Flynn) and Kalen (the son of her husband James Keach). Over the years, she’s spoken in interviews about parenting topics ranging from in vitro fertilization and childbirth to work/life balance and challenges dealing with attention deficit disorder.

In honor of her birthday, we’ve rounded up 13 quotes about parenthood from Seymour.

On What She Wishes She’d Known Before Having Kids

“I think I should have spent some time with teenagers first. The thing that people think is… ‘Oh… we’re gonna have a baby! And, then it’s done and now I’m a parent.’ Every child is different, and there’s no handbook on it. Each child is unique and special, and the advice I’d give is to hear them — really listen — even if you don’t agree.”

On Her Blended Family

“All the older kids helped out with the twins, which was great. We’re really close, including my two stepchildren, Jenni Flynn and Kalen Keach. But we don’t use the word stepkids. We do not distinguish. I’m very proud of all my children, and I spend a lot of time with them. All the fathers are very close to their children and the kids are very close to all the parents. The exes and everybody gets along. If I co-parent a child, as I did Kalen and Jenni, I’m incredibly close to those mothers and their stepfathers. Jenni’s sisters from her mother’s following marriage will spend Christmas or New Year’s with me. My twins refer to Kalen’s two brothers from his mother’s then-marriage as their brothers from another mother.”

On Parenting A Child With ADD

“The one with ADD has a fantastic brain — extraordinary ideas and concepts that nobody thinking in the normal way would probably see — and what I would say to people with kids like that is that yes, it’s incredibly frustrating. You want your children to be best at this and that and to fit into the box, but not every child is supposed to go to college, be good at math, or whatever. I never went to college, but I got to testify at Congress… so there ya go. You find your own place. Good parenting is helping your child find their strengths versus focusing on what they’re not doing as well as someone else.”

On Doing The Best She Can

“The kids know I would choose family over any role and over anything in my life. I don’t know if I’m a great mum. I’m the best mum I know how to be. I think it’s all about listening to your children, communicating, and caring enough to be involved in their life. I was around for all of my kids. When they were young, anywhere I filmed, I took them with me. When they were younger I had to make compromises, sometimes about not taking roles that may have taken me away from them too much. They know that I love what I do, and they also know we’re all about family, so they are all about family.”

“I see them all (of the children) all the time, and they are friends with one another, and they joke about the time they spent with me. We’ve been able to accept what happened, while not forgetting or disregarding the good we had together. Once you love someone, you always love them. You may not be… married or to be in a relationship for a long time, but the relationship you had was valuable, and then it becomes something else, if you’re fortunate. You can figure out how to have a different type of relationship.”

“For me, Mother’s Day is every day. I find it extraordinary that we need one day in which to suddenly go, ‘Oh, Mom!’ To me, I never forget my mother … I have the privilege of being a mother of six and a grandmother of four. Being a mother is a very big part of my life.”

On Becoming A Parent

“With your first child, you try to do everything to perfection. At the same time, I was at the height of my career. I had just starred on Broadway in the original “Amadeus,” which won Tony Awards, and had done “East of Eden” (for which she won a Best Actress Golden Globe) and I had “Somewhere in Time” come out all in the same week. Weeks later, I announced I was pregnant. Nobody in those days did theater, television and film, and the last thing on your mind would be having a baby.”

On Her First Birth

“I didn’t think I was going to get pregnant that easily. We (she and Flynn) had been living together and planned to get married, and I had been taking care of and spending time with Jenny, David’s older daughter, so my biological clock was ticking quite loudly. I had Katie (at age 31), and I wanted to have natural childbirth, breathe my way through it, possibly have the baby in a hot tub, have a doula, but my father was an OB/GYN in England, and he said, ‘There is no reason to have pain, so get an epidural, and do not have a baby anywhere but in a hospital because even in the most normal of pregnancies, something can happen. And, while you may be willing to take that risk, do you really want to know that your child who might have needed emergency help didn’t get it?!’ So, I had the baby in the hospital, and it wasn’t a perfect birth. I don’t think I’ve ever told anyone what happened here… but she tried to exit from two places at some time. The doctor said he’d never seen anything like that. So, there was a lot of stitching going on. And, the interesting thing is that when Katie was pregnant with Willa, she announced she was gonna have a doula, etc., and I reminded her of the story of what happened with her. I’ve learned, though, with children that they never listen to you.”

On Her Twins’ Namesakes

“The twins are named after Johnny Cash and Christopher Reeve. Christopher knew I was pregnant and loved the boys. Johnny became a really good friend when I did ‘Dr Quinn.’ He asked me to do a movie of his life, which ended up being ‘Walk the Line.’”

On Being A Grandmother

“I’m the grandma who likes to steal the kids as they come through the door. I’m the one that likes to say, ‘Why don’t you have a date night and leave the baby with me?’ I’ve baby-proofed the whole house again; it’s like starting all over. Being a grandparent is fantastic because you get to borrow the children for an intense amount of time, and then you get to hand them right back. I loved watching all the kids deal with the pregnancies and now watching them as parents.”

On IVF And Advanced Maternal Age

“We had a couple of times where it didn’t work. It was emotionally a major roller coaster. I tell anyone who tries to do it that on paper it looks easy, but in reality, it’s very hard. I had pre-eclampsia which often happens when you have a late pregnancy. But, the boys turned out great. They were on heart monitors for the first six months, but one is now on scholarship in Colorado playing baseball, and the other is a rock musician.”

On Her Children’s Paths

“All of my kids are different. I’ve tried to keep them away from what I do for a living but they’ve all found really different and unique things that are very creative.”

“It never occurred to me to take care of myself. Only recently did I suddenly stop when someone asked me ‘What do you want for you?’ I had never asked myself that question. But, by the same token, I’m incredibly grateful for all the choices I’ve made. I got a career, I had a family. I could have done without some of the divorces and financial stuff that happened, but for the most part, I’d say I’ve had an amazing experience. And, I really appreciate life. If you don’t have downs, you can’t have ups. There were movies I turned down because I couldn’t take a child there. I took them on location for every film. I had a nanny with me because otherwise the children wouldn’t have been safe. I parented as much as I possibly could. Even to this day, I talk to my kids regularly. I know exactly what’s going. The great thing about having a family is that you have them forever.”