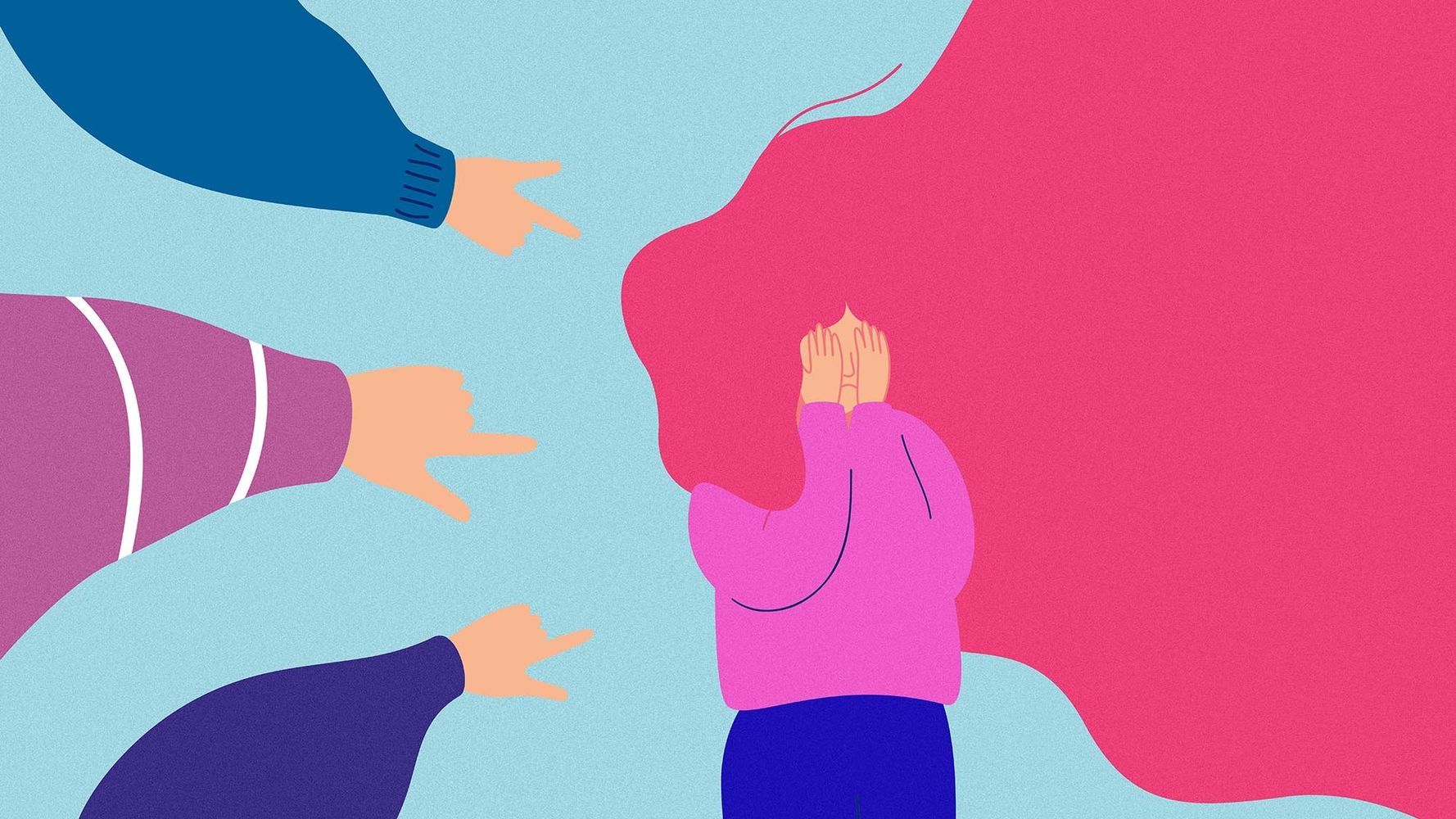 Growing up in the ’90s, Jessica Sprengle could name all the big fad diets of the day: Weight Watchers, Atkins, the South Beach diet, SlimFast ― you name it, her parents and other family members had tried it.

Offhand comments about bodies, both hers and their own, were often made in her house, and weight gain rarely went unnoticed.

“I can distinctly remember one of my grandmothers asking me, at maybe 9 or 10, if I could believe ‘how fat [she’d] gotten,’” Sprengle told HuffPost. “Though it was never explicitly stated that my body was a problem or that I should do something to change my body, I internalized the message that being OK with my body was not an option and that I should always be working toward losing weight or pushing toward thinness.”

“Our culture is intensely fatphobic and very invested in their prejudice against those in fat bodies.”

All of this left Sprengle with the distinct impression that there was a moral component to weight gain: Fat was bad, and thin was very, very good. She internalized the notion that the health consequences that came with excessive weight gain ― high blood pressure, diabetes and other health issues ― were a direct result of a fat person’s moral failure to take care of themselves and stay thin.

Given the fixation on dieting in her house ― and how pronounced and pervasive fat shaming is in our culture ― it was almost inevitable that Sprengle would fall into disordered eating.

“Though I don’t believe my eating disorder developed exclusively because of my family’s penchant for dieting, I know that it played a role, just as genetics, neurobiology and trauma did,” she said.

Now, as a licensed professional therapist specializing in treating eating disorders, Sprengle is quick to correct the idea that being fat is a kind of moral failing.

“I tell my clients that our culture is intensely fatphobic and very invested in their prejudice against those in fat bodies,” she said. “Negative characteristics are often incorrectly attributed to people in fat bodies ― slovenliness, uncleanliness, low intelligence ― due exclusively to their size versus based in any real, true evidence.”

As Sprengle’s own story shows, negative conceptions about bodies ― unhealthy body standards, endless yo-yo dieting ― are often passed down from one generation to another.

As a parent, how do you effectively get across to your child that “fat” isn’t a bad word and that weight fluctuation throughout life is entirely normal? Here’s what experts like Sprengle say.

Vanquish the words “good” and “bad” from your vocabulary when it comes to discussing the contents of your fridge. Let food be food and take its relative moral value out of the equation.

“Children are concrete thinkers, so labeling foods or bodies as ‘good’ or ‘bad’ or even an offhand comment such as ‘I’ve been so bad lately’ can have a lasting, detrimental impact.” said Jenny Weinar, a therapist specializing in disordered eating and body image concerns.

It’s important to encourage neutrality when it comes to food. Teach your kids that all foods can fit in a healthy diet, and that includes sugary foods or cultural holiday foods that are only served at your table every so often.

“No food should be strictly off-limits,” Sprengle said. “When we restrict a child from eating certain foods, they will typically overdo it at some other time when they have access.”

Be equally mindful of the words you use to talk about other people’s bodies and how you respond to your children’s casual but critical remarks about how others look.

“If they describe someone as fat, rather than correcting them or discouraging them from using that word, which only reinforces that fatness is a bad thing, use this as an opportunity to teach them about body diversity and celebrate the fact that there are all different kinds of bodies in the world,” Weinar said.

If you’re looking for a helpful visual aid to explain body diversity and why it’s wrong to equate weight with health, Weinar recommends the popular YouTube clip “Poodle Science.”

Model acceptance and appreciation of your own body ― no matter your size.

Every biting, self-chastising remark you make about your body echos through your child’s head. So do the disdained glances you make in the mirror when trying on something that’s far back in your closet.

But if you speak lovingly of your body, that leaves a mark, too. Your child learns how to relate to their bodies by watching how you relate to yours, so be mindful of your words, Weinar said.

“Imagine the impact it could have for your child to see you celebrating all the amazing things your body can do, nourishing your body in ways that are pleasurable and honor your culture, and engaging in movement that feels joyful and life-giving, rather than berating yourself and starting one punishing diet after another,” she said.

Instead of hiding behind a cover-up at the beach, wear your swimsuit unapologetically, Weinar said. Order that side of chili cheese fries without saying things like, “Ugh, diet starts tomorrow.” If you embrace your body exactly how it is in this moment, you’ll lay the groundwork for your children to embrace their whole selves, too.

“Work on healing your own relationship to food and body, and your children will be better off for it,” Weinar said.

Don’t comment on your kids’ weight, even if you’re trying to compliment them.

It probably doesn’t need to be said that negative comments about your child’s weight fluctuation are counterproductive and can aggravate weight and body issues. But interestingly, researchers have actually found that any comments ― even well-intentioned comments about slimming down ― are detrimental to young girls’ well-being.

The Cornell University researchers who conducted the study didn’t make a distinction between positive and negative comments, but they found that any comment a girl remembered hearing about her weight led to lower satisfaction with her body as an adult, even if she wasn’t overweight.

That particular study was focused on girls and women, but other research shows that boys are not immune to body image worries. While girls strive to be thin or lose weight, teen boys typically become dissatisfied with their bodies if they’re not tall and muscular, according to a 2015 study published in the journal Adolescent Health, Medicine and Therapeutics.

So how should you talk about weight if you’re concerned about your child’s health? You can point them in the right direction without saying a word. Experts recommended serving nutritious foods at home, making fresh fruits and veggies easily accessible in your kitchen and integrating physical activity into family life.

Remind them that weight gain and weight loss is often something we can’t control.

Without guidance, a child can easily default to thinking that “thin = automatically healthy” and “fat = unhealthy.” Explain to them that there’s sometimes more to someone’s health profile than meets the eye, said Michelle Elman, a body positivity speaker and the author of “Am I Ugly? One Woman’s Journey to Body Positivity.”

“That ‘fat = unhealthy, thin = healthy’ way of thinking negates the times people lose weight because they are depressed or coping with grief or when they take medication and that creates weight gain,” Elman said.

Have kid-level conversations in which you work through ― and hopefully dismantle ― the stereotype that fat people are unsuccessful and lazy or lack willpower. Teach them that weight is something that fluctuates across your lifespan and that gaining weight isn’t something to beat yourself up over.

“All of this revolves around the idea that weight is something that we can control, and while there are certainly some aspects that can be controlled, not all variables are within personal responsibility,” Elman said.

Surround them with body diversity

Lastly, talk positively about bodies of all shapes, sizes, races and abilities or disabilities. To belabor a point you’ve probably heard a million times by now, representation matters: Watch TV shows and movies that depict all types of people and all different kinds of bodies. Read picture books that are inclusive and diverse without necessarily being about the importance of diversity.

If you have teens, encourage them to follow influencers and models who actually look like them so that their social media feed isn’t an infinite scroll of rail-thin white women.

“The bottom line is, you want to make sure your child is watching media that accurately represents the world and talks positively of different kinds of people so that their perception of beauty is not so narrow,” Elman said.

This story is part of a HuffPost Parents project called I See Me, a series for all parents and kids on the power of representation. We know how important it is for kids to see people that look like them on the biggest stages, from politics to sports and entertainment and beyond. Throughout February, we’ll explore the importance of representation in teaching kids about difference, acceptance, privilege and upstanding.

You Really, Really Should Never Comment On Your Child’s Weight

Fatphobia Is Ruining My Female Friendships