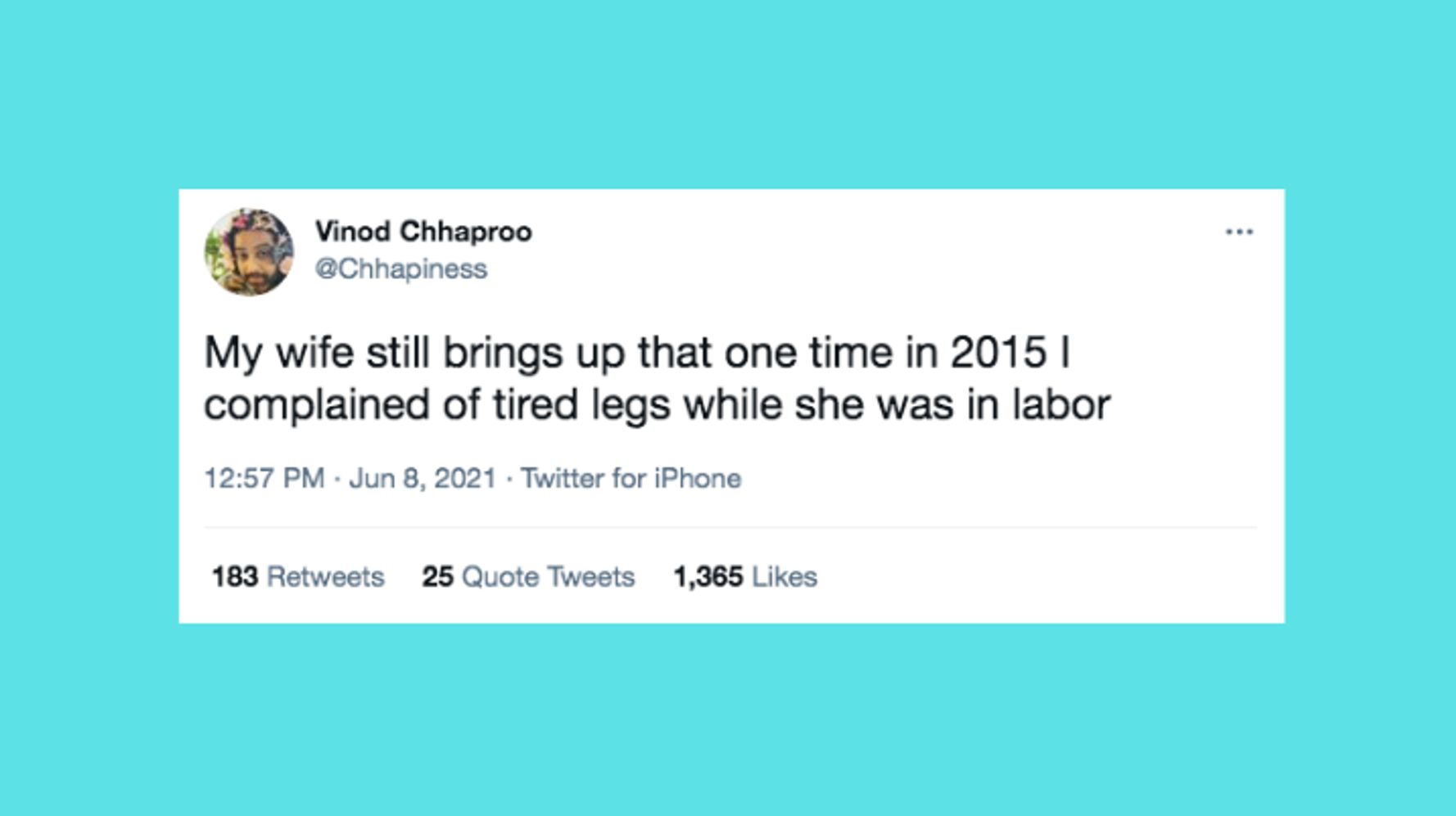 Women who’ve been pregnant have plenty of jokes, gripes and random musings to share about the experience. Apparently the same is true of men whose partners have been pregnant.

Over the years, expectant fathers have tweeted about those memorable months leading up to the birth of the baby with their signature dad humor and a dash of earnestness. In honor of Father’s Day, we’ve rounded up 35 such tweets. Enjoy!

Sticking a margarita in my pregnant wife’s face and saying “ain’t no fun if the baby can’t have none” didn’t go over as well as I’d hoped.

Before my wife became pregnant, I always assumed Braxton Hicks was a country music artist.

Me: You always play the baby card

Wife: I’m pregnant
Me [realising I’m about to be a dad & thinking of all the sacrifices & adjustments I’ll have to make]: hi pregnant

Because I felt she needed to be judged by 300 strangers…

Salesperson: Can I help you?

Me [holding up pregnancy pants]: do you have these in mens sizes?

[walking with my pregnant wife]

Stranger: how far along are you?

Me: finished A Dance with Dragons, just waiting on GRR Martin to finish book 6.

Wife: she was talking to me.

Me: but you haven’t read the books.

My pregnant wife made me adjust the thermostat 9 times in the last 2 minutes.

I’m such a failure

my wife *embarassed*: but now people will know we had sex

My son told my pregnant wife she should swallow some toys so his unborn brother could play with them. He’s a genius as far as I’m concerned.

When your angry, hungry, hormonal, pregnant, wife asks you, “Where do you want to eat?”

Is NOT the right answer…

Wife: Does this dress make me look pregnant?

Wife: So I don’t look good when I’m pregnant?

Me: *flees the country*

“I bear the seed of my ancestors”

I was reading to my kids today and in the story, there was a pregnant woman.

My 3 year-old asked, “What happened to her belly?”

I replied, “There’s a baby in there.”

[woman stops my pregnant wife & I]
Her: when are you due?
Wife: middle of may
Her: what are you having?
Me: a fucken baby

Apparently it doesn’t matter how big the burrito was you’re still not allowed to compare it to being pregnant. #Dadlife #TheMoreYouKnow

women, stop putting your hand on your mans stomach in pictures. he’s not pregnant and it looks stupid.

My pregnant wife threw up chocolate because apparently the baby doesn’t like it.

In other news, she’s carrying the Antichrist.

[Walking with pregnant wife]
Girl on the street: awe *touches wife’s stomach* what is it?
Me: THAT *points at wife* is my wife
Girl: I know that. I mean what kind of baby?
Me: um human *under breath* idiot

Watching my twin toddlers push and wrestle for space in the double shopping cart at the grocery store, it’s pretty clear why TwinzerMom was so uncomfortable toward the end of her pregnancy. #Dadlife #Parenting #Momlife

Someone just told me his wife is 39 weeks pregnant. Thats not a good scale for me cos I don’t know how long it takes. Just say “pregnant af”

5-year-old: What happens if the baby pees?

Pregnant wife: She won’t. She waits till she’s born

5: Right. Just like no one pees in the pool

Me: my wife is pregnant so she’s been rewatching watching Game of Thrones
Coworker: oh congrats, how far along is she?
Me: season 3

Me: Let’s name her Éclair

Wife: [pregnant] We’re not naming her after a donut

Me: Technically, an éclair is a French pastry — not a donut. The distinction-

After a long conversation with my wife I now admit that “buckle the fuck up, buttercup” was probably not the best response to our friends announcing their first pregnancy.

Me: How was your first day without coffee?

Wife: Fine. Remember I quit cold turkey when I was pregnant

Me: Yeah, but you tried to stab me

Me: I guess a lack of coffee causes memory loss

Sure, when my new baby is born I will be very happy. But on the other hand, I’ll have to stop making pregnant wife jokes.

Serena Williams won a grand slam tennis tournament while pregnant and I didn’t feel like getting out of bed last week because I had a cold.

Pregnant wife: I think we should have the baby at home
Me: ugh can’t it live with your parents?

45 Hilarious And Relatable Tweets About In-Laws

30 Funny Tweets About Being An Uncle