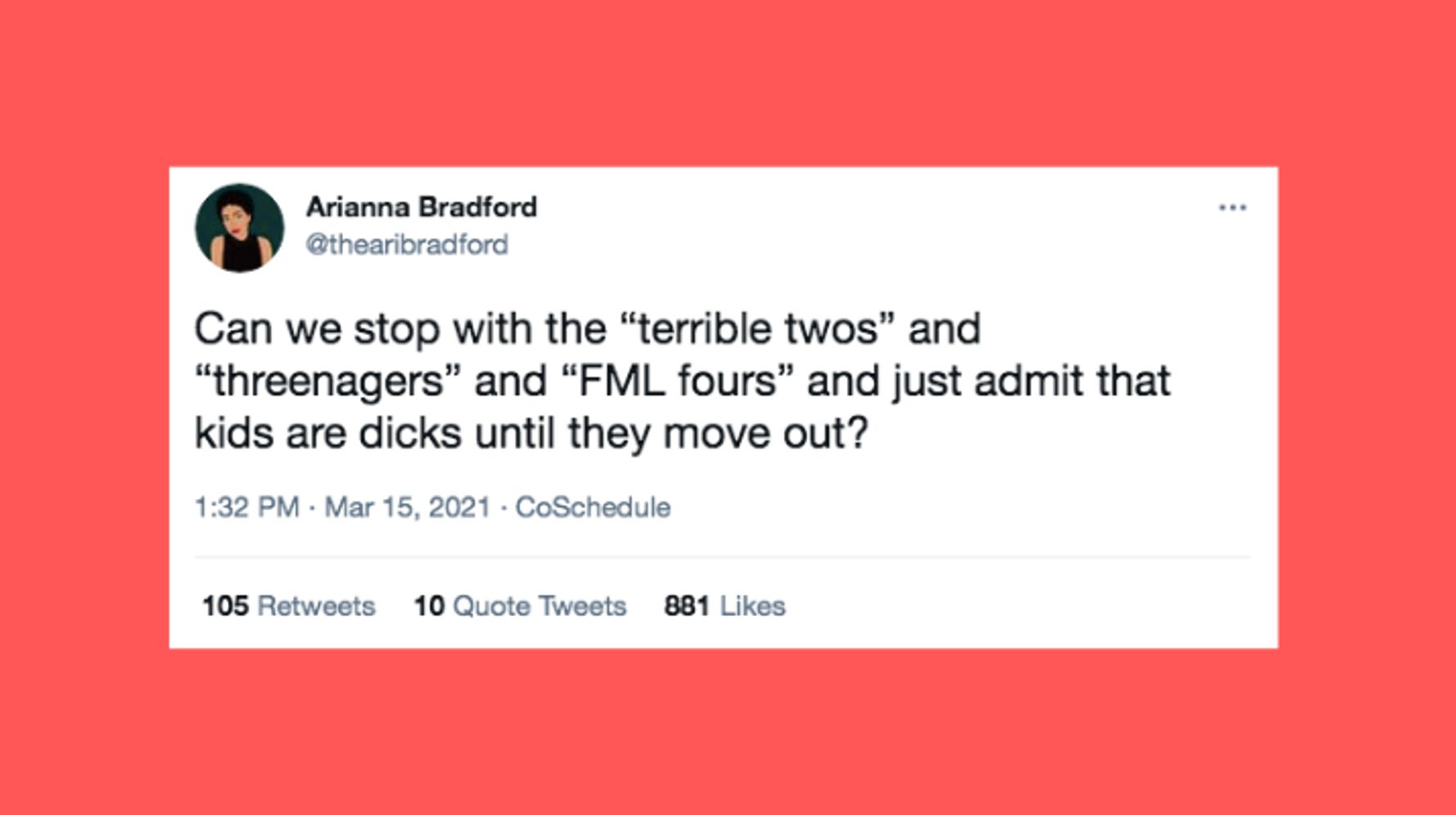 Amid the chaos and exhaustion of raising children, many parents have turned to Twitter to vent about their hostility. We rounded up 35 tweets about the hilariously harsh things parents have said about their kids.

Can we stop with the “terrible twos” and “threenagers” and “FML fours” and just admit that kids are dicks until they move out?

Whenever my kids start fighting, it’s like guys, guys, guys— you’re both assholes.

Being a stay at home parent can be lonely and frustrating because the only people you get to talk to all day poop their pants and are complete assholes.

My toddler is very polite when asking to do naughty things. He’ll be like “please may I draw on the wall?” or “please may I throw food on the floor?”

And so I respond just as politely “please may you stop being a little dick?”

“Why don’t you ever tweet nice stuff about your kids?” asked my idiot daughter.

Sat. night, watching the kids sweetly sleeping, tears in my eyes.
Because I know those holy terrors will be up at the crack of fucking dawn

My 5 and 3 year old’s made up knock knock jokes are so dumb.

“The Giving Tree” is my favorite book about how kids can be incredibly ungrateful little shits.

Sorry my toddler is being an asshole, we’re hoping he’s working on a new milestone, but it might just be who he is now

I told my 6yo son that apples grow with the stickers on them and he believed me. Ha! Kids are such idiots.

First we blamed teething. Then we blamed developmental leaps. Now, we have no choice but to admit this is not a phase.

Our child is just an asshole.

I used to refer to our toddlers as “holy terrors,” but it turns out there’s nothing “holy” about them. #parenting

*showing friends videos of my toddler*

Me: Look at this idiot

My toddler has this condition where even though he knows the difference between right and wrong he does the wrong thing anyway. It’s called being an asshole.

I might have brunch. For the parents: Brunch is when you don’t eat food until almost mid-day because no tiny tyrant has awoken you at 7 AM.

My kid just tried to pick up something he was standing on. Moron

First you think “I want kids!”
next thing you know you’re middle aged and catering to an adorable little tyrant with a Bandaid habit.

My 2 year-old is so terrifying that I had to help the monster under his bed find a new job today.

Teach your children to love, so that when they act like little monsters, you can take away things that matter to them.

If you tell kids anything is possible if they work hard enough for it, sometimes they will believe you because kids are idiots.

2 year old has started yelling “I’m Iron Man!” before growling, shouting, stamping, and throwing toys around the room like he’s fighting them

Although I’m not a fan of the boisterous behaviour, I’m more concerned about what sort of moron confuses Iron Man with the Hulk

Had a nightmare I was being chased by tiny monsters who were clawing at me and screaming in my face oh wait I’m wide awake that’s just my life.

[game night]
Me: why are the kids crying?
Wife: they misunderstood when u said snakes & ladders
Me: they’re not real ladders u fucken idiots

Who called them “kids” and not ungrateful little shits?

Impressed the kids by pushing a button & defrosting the car windshield again.

My toddler can officially climb INTO his crib. He cannot, however, climb out. What an idiot.

For as much as I bitch about my kids, I sure do love those goddamn little shits.

Parents be like: God, my kid is being such an asshole today.

Parents also be like: WHAT DID YOU SAY ABOUT MY LITTLE PEANUT BUTTER CUP ILL KARATE CHOP YOU IN THE THROAT

35 Funny Tweets From Dads About Pregnancy

22 Tweets About The Hilariously Petty Things Parents Have Done